Gaze into your future...

Not sure
what's
for you?

Be a "student for a day"

10 Reasons: Our Carpentry School (CVCEC) – went from Building 11 to 88 Stairs – per Semester

by Info@nfsb.me
Comments are off 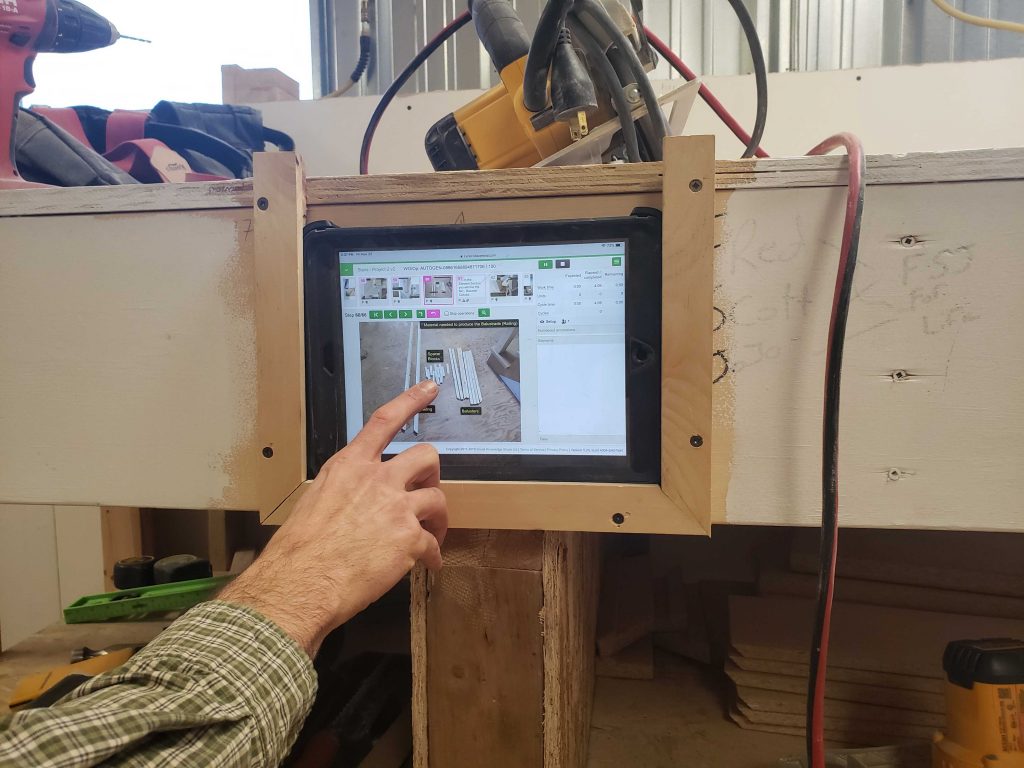 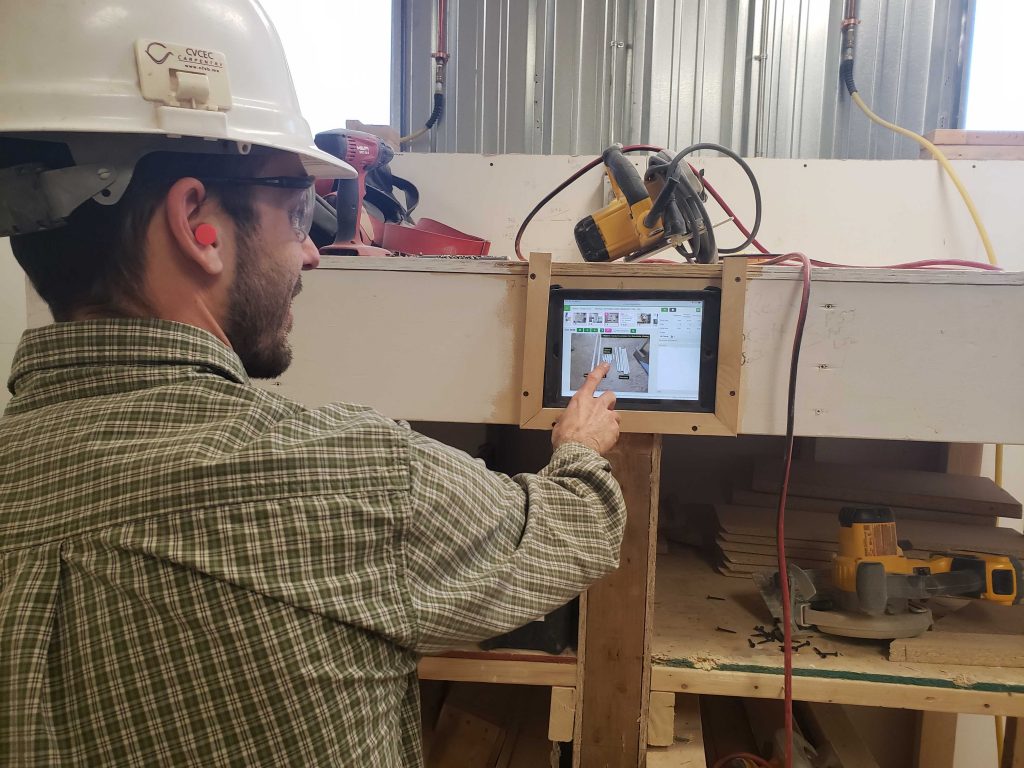 THE FOLLOWING IS AN ORIGINAL ARTICLE FROM VKS

Learning any new skill or trade takes time. But what if you could speed up your learning and gain in-depth knowledge in half the time? That’s exactly what happened to the carpentry program at the Chateauguay Valley Career Education Centre (CVCEC). Before VKS, a teacher would spend a lot of time showing a group of 22 students how to build a set of stairs within a semester of 120 hours. Along with not leaving the teacher much time to provide one-on-one support for each student to properly learn carpentry, it also left a considerable amount of room for error. Key information would be misinterpreted or lost as the class was taught in the typical show-and-tell way.

Using the VKS digital step-by-step instructions on tablets, students enrolled in the carpentry program were able to go from building 11 sets of stairs to making 88 sets of stairs in the same time frame as before without compromising their learning or the quality of their output. We caught up with Jovan-David Mercier-Montminy, a carpentry teacher at CVCEC to find out just how VKS helped students begin to make 8x more stairs than before.

1. VKS As the Practical Tool
When viewed from an outsider’s perspective, any project always appears to be easier than it really is. As Jovan best pointed it out, “It looks really simple to build a set of stairs because you look at it and there are 5 steps. In reality, you need to perform 100 actions. And for apprentices that are very fresh to building stairs, those 100 steps are a mountain to remember.”

The same can be said about any industry, whether high-volume low-mix ones such as the electronics industry or low-volume high-mix such as the medical industry. When it comes to teaching carpentry, “It’s basically how we can express concepts into images and give all the specifications and guidelines for a practical project. VKS is the practical tool that really helps with the hands-on part of our job,” he added.

2. Easy to Implement for a Low-Tech Person
Jovan explained that one of the biggest advantages of the VKS software is being able to use it without being, as he said, “a tech person.” Teaching is his strength, but when it comes to technology, it is important for him to use software that works intuitively with him.

Coming from a background where his colleagues and students aren’t as tech-savvy either, it is important for them to use software that is intuitive to use. Without any training, Jovan was able to go in and begin creating digital work instructions for his students to use and learn carpentry straight away. Even if tweaks are to be made, these are made in a quick way, across multiple guidebooks, with just a few taps of a finger or clicks of a mouse. “The user-friendly part from a teacher aspect of just being able to create a document is unparalleled,” Jovan added.

3. The Value of Annotations
When talking about the advantages of using VKS both in a group and an individual setting, Jovan was very excited to mention the use of annotations. More specifically he said, “All I need to do is take the pictures and within just a couple of hours, I can annotate. And then, my students use iPads to slide from image to image.”

Even more crucially, he noted that using VKS, his students are able to gain and benefit from 100% independence: “They’re independent, they just build according to the VKS plans.” It’s important to consider this aspect in the grand scheme of the training or manufacturing process. All you need to do is set-up the step-by-step instructions one time for your students or employees to then be able to utilize them repeatedly and across the board. Even better is that training with VKS is versatile and can also be used as quiz-style training guides.

4. Each Student Now Feels More Prepared
At the end of the day, everything comes down to productivity. Because of the intensity of having to describe all the steps before, 22 students could only build 11 sets of stairs. But using VKS and removing most of the redundant interactions between the teachers and the students, they are now able to build 88 stairs in a given semester of 120 hours of class. More specifically, 22 students used to build 11 sets of stairs, but are now able to build 88 sets of stairs, which means they’re building 4 stairs each.

Even better is that with the increase in quantity also came an increase in quality. By the end of the semester, students find themselves feeling more prepared as a result of having had the opportunity to build the project more than one time. By building four stairs each, students are able to adequately prepare for the exams at the end of the semester. 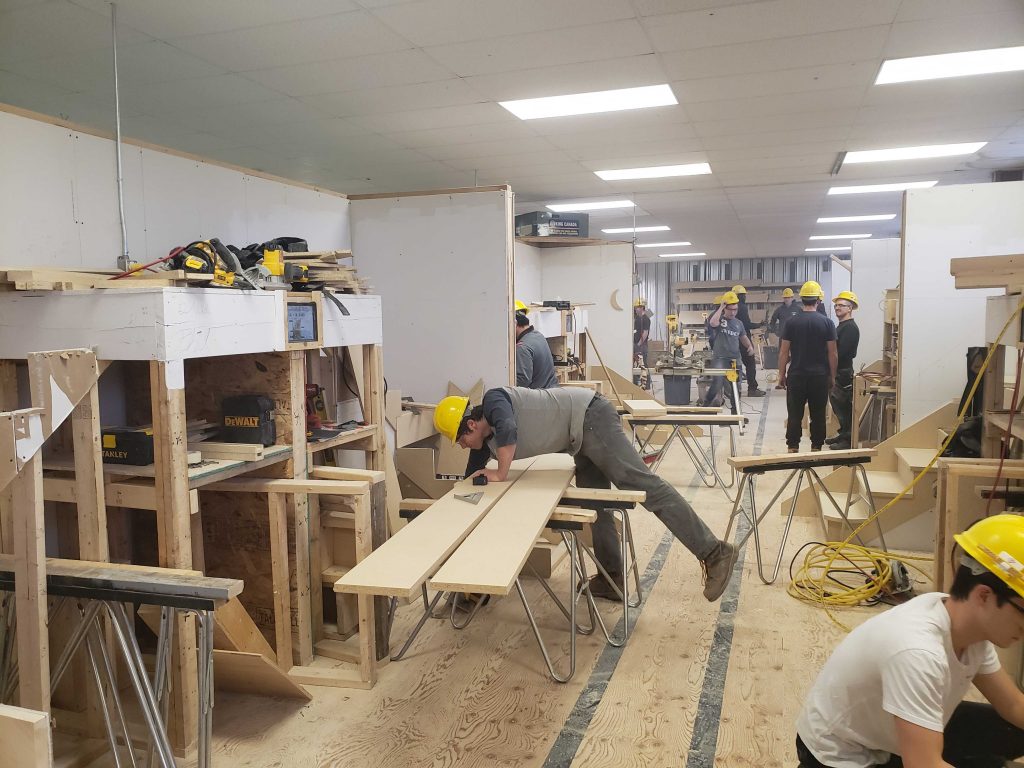 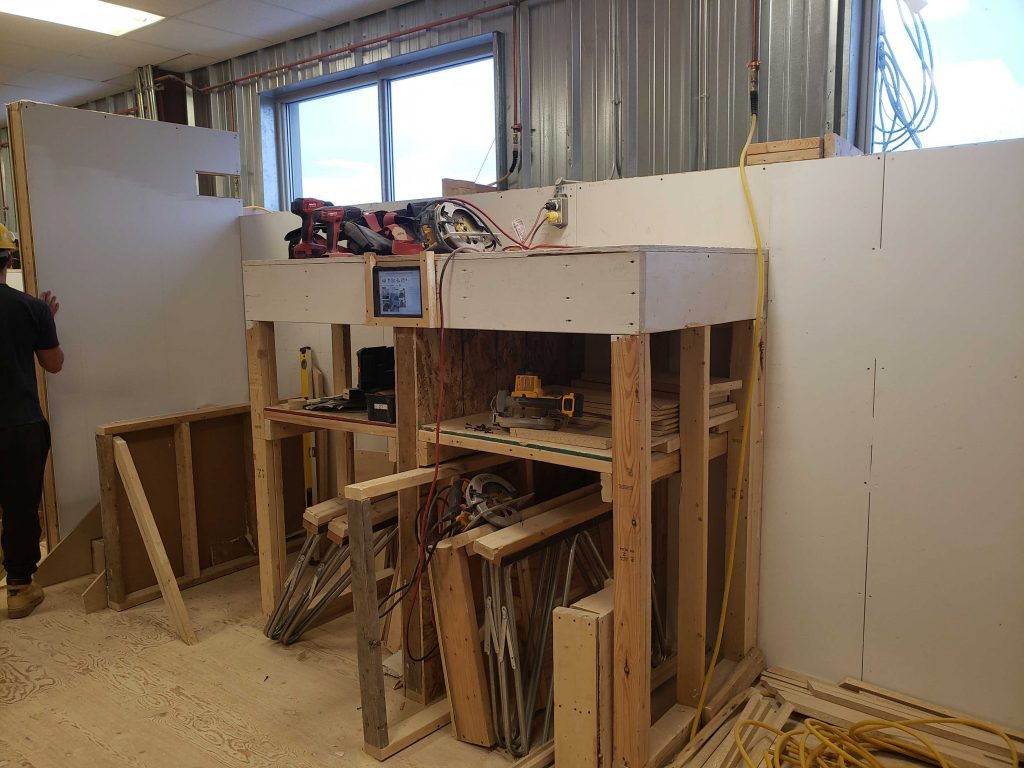 5. Eliminating the Telephone Effect
As we’ve seen before, VKS is a flexible software that can be used in many different ways and that’s exactly what CVCEC remarked. To help students learn carpentry, they utilize VKS in both a group setting and one-on-one.

In group scenarios, in particular, Jovan remarked the teachers have been able to, “become more involved with the project.” Using VKS has allowed for the “telephone effect” to be eliminated from the classroom. Gone are the days of students becoming embroiled in a “the teacher said this, no the teacher said that” kind of discussions. With digital work instructions, these debates have been reduced to zero. This is because there is no debating with step-by-step instructions that continuously remain the same. Information never gets “warped” or “distorted” and as Jovan points out, the group is able to always refer to a document with pictures and annotations that stay static.

6. The Group Advantage
Without VKS, the teacher has to be 100% involved in the classroom. In-between teaching and demonstrating the necessary skills, there simply isn’t enough time to clarify each point as necessary. Along with eliminating the telephone effect, the CVCEC also experienced a nearly tenfold increase in productivity that they couldn’t have otherwise been able to achieve.

Although the carpentry school tried using a bank of photos in the past, it simply didn’t have the same desired effect. Jovan explained that “for one teacher with 22 students, it’s almost impossible to guide everyone through 4 sets of stairs by just talking, so you need a technological device.”

And this is where VKS came in. A classroom of 20 was able to use VKS in teams of 5 with VKS being available on 4 iPads. While Jovan pointed out that it’s “not the same result and it’s not the same effect” as for individualized work, they were still nonetheless able to notice 8x more productivity than without the use of VKS altogether.

7. VKS Becomes the Teacher
Speaking of using VKS to teach a group, the carpentry program noticed that using digital work instructions enables VKS to become the teacher. Whereas before, the teacher would have to be involved in reiterating the same important facts over and over again to help students learn carpentry, with VKS, it’s as simple as programming the knowledge into the software one time.

It also becomes easier to clarify or demonstrate more complex steps as needed and depending on each student’s individual needs. “VKS becomes a second teacher in the classroom.” “The real positive thing is, let’s say if a student is a self-learner, they can just do independent teaching and then this frees the teachers to be available for the other students because we have 22 students for 1 teacher.” While it might sound like VKS becomes the backup teacher, Jovan was quick to clarify that VKS becomes the main teacher. “I feel like the teacher is removed from the class and becomes available to answer questions. VKS becomes the teacher.”

8. Promoting Independence in Self-Learners
CVCEC determined that one of the best parts of implementing VKS in the classroom is that the number of students signed up for their class increased majorly. In Jovan’s words, “attendance skyrocketed because students were much more motivated since they didn’t have to wait for the teacher all the time.”

Not only does VKS become the teacher, but the teacher is then able to take on a more exemplary kind of role where they answer crucial questions that may not have otherwise come up due to lack of time.

Since the basics and more intermediate topics are covered by VKS, the teacher is then able to share more in-depth and advanced knowledge. This is especially important when considering the fact that most semesters only last a limited amount of hours and students run out of time to learn as much as they possibly could.

“I believe that VKS is the missing link between the classroom and the shop floor in vocational training centers.” Jovan also elaborated that, “The program provides all the necessary information to the students, allowing the teacher to guide students and focus on proper comprehension. We can finally accommodate self-learners and create time for students who need guidance.”

9. Ease of Using Pictures
Along with annotations, the carpentry school also preferred to use pictures over videos. Although they started making videos in the beginning, they quickly realized the value is simply resorting to pictures. As Jovan explained, videos “need to be super accurate because if you make a mistake, then you have to re-do the whole thing.”

“So it’s not very feasible to make productions of videos, but just with the picture tool of VKS, a major problem is being solved.”

Using pictures and annotations, the carpentry school was able to quickly get work instructions up and running for their students. In the event of any modifications or comments, they are then able to rapidly go back into the Guidebooks and apply the necessary changes without having to re-do everything. While videos can still be helpful for most companies, the CVCEC has instead preferred pictures for the time being for the sake of rapidity and convenience.

10. Ability to Go Back & Forth
Along with annotations, the CVCEC pointed out another valuable feature that is highly important for their students. Jovan explained:

“One of the cool features about VKS is to be able to flip backwards, go back on pictures, go forwards on pictures. Go a bit further to see what’s coming and going back.” He elaborated that the ability to go back and forth eliminated at least one hour’s worth of intervention time per student per day. Before VKS, teachers would often have to clarify the concepts they had already explained or refer back to initial steps.

Now, using VKS, their steps have been put down into a static form that students can refer to at any moment during their journey to learn carpentry. The best part is that unlike being taught in an oral form, the VKS work instructions stay the same no matter what, eliminating any debates about the accuracy as facts need to be checked just the one time.

To learn more about how you can apply VKS in a classroom, check out McMaster University’s development of a Learning Factory using our software.