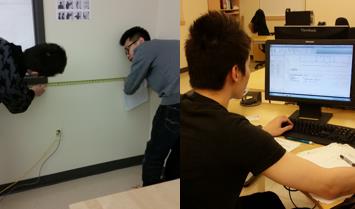 A small look at how drafting students are getting more equipped for their trade.

Similar to the other programs offered at NOVA Career Centre, the Residential and Commercial Drafting program offers its students both theoretical, as well as hands-on learning. For the students enrolled in the drafting program, the first half of the curriculum consists of modules that are fairly textbook-based. Although these modules provide students with an abundance of essential information, students sometimes crave for something beyond what a textbook can offer.  At the very end of the program, students are required to do a stage (at a company of their choice) in order to gain some practical field experience before they graduate. As luck has it, these students don’t have to wait until the very end of their program to gain some experience in their field of choice. Module 10: Construction Site Data allows students to have a break from their routine textbook-based learning and get more creative and hands-on work related to their field.

This module is designed to carry students through a thorough learning process that requires students to take the existing measurements of a site, create sketches of what was seen at the chosen site location, and later, produce computer aided drawings based on the data recorded. In order to carry out the requirements of this module, students are given tape measures, tracing paper, and access to computers with drafting programs such as AutoCAD and Revit to create the computer aided drawings that will accurately reflect what was seen on site.

Similar to the large classrooms in NOVA, these two large rooms in Billings also contained two smaller rooms; one of which was being used as an office and the other as storage.

The design project that was given to the students consisted of a proposal for a renovation project involving the site they were assigned to measure. The scenario that the renovation project put forth was that the existing state of the rooms (excluding the extreme walls, such as the exterior walls, interior side walls, and the interior walls adjacent to the corridor) were to be demolished and the total area be renovated to include a total of two newly designed classrooms, a student lounge (for the students registered in the Residential and Commercial Drafting program exclusively), and a teacher’s office.

The measuring process
The students were given a maximum of one period to record all the existing measurements of the site. Students were divided in to group of two and were ask to draw a sketch of the existing site upon arrival to the location. After each individual student created their own sketch of the site, they went with their respective team member and began recording the dimensions of the space.

At the completion of the measuring process, many students expressed their content in being able to participate in the exercise and how they would enjoy future projects that would involve more hands-on work.

What’s next?
Having taken down all the required site information, the next step on this project itinerary is for the students to produce computer drafted drawings of the existing spaces, and later, develop both plans and interior elevations of their renovated design.

Looking beyond the project’s itinerary, it is clear that these students enjoy having projects that involve more hands-on work, as well as the freedom to create their own designs. The Construction Site Data module is an essential module for students to take, as it allows them to have a closer look at what they will be doing after they graduate from the program. It is modules such as this that encourages students to continue working hard towards their academic goals. When students are enjoying their work, it is clear that they have found meaning in what they are doing. Future opportunities for hands-on work will arise for these students, and when that time comes, there is no doubt that every measurement taken by each student will be much more meaningful than the one before.